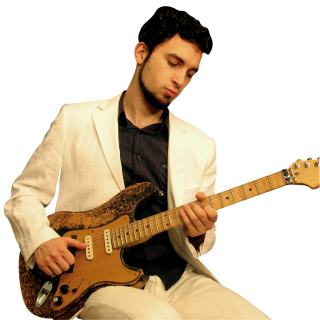 
When I was a 9-year old kid, by playing around with my mom's guitar I found that it was the instrument on which I can ultimately express myself, so later on I started taking lessons from an older, experienced jazz guitarist. At that time I was playing only basic stuff, like chords and some easy songs. Later I discovered Jimmi Hendrix, and by all means I desired to start playing electric. At that time (age 13) I was on my own journey learning to play. But the fast playing started when I first saw Steve Vai in the movie 'Crossroads'. I never thought that it was possible to play like that, but I wanted to achieve as near to that as I could. So, I started practicing, learning songs, playing in bands, went to music school for a year and a half, but I never went professional, until Guitarmasterclass.


Playing and Influences
For me, playing is a way of expressing yourself, so I wanted to learn to express my self as truthful as possible. So, to do that, I found that I needed to be influenced by other musicians, so that my playing style can be formed, and I don't wind up misunderstood ;)
Musicians, besides the ones mentioned above that influenced my playing style were: Carlos Santana, Stevie Ray Vaughan, Eric Clapton, Mark Knopfler, Jeff Beck,... Joe Satriani, Michael Lee Firkins, Michael Romeo, Radomir Mihailovic Tocak, Vlatko Stefanovski, T.J. Helmerich, Brett Garsed, and many others..


At GMC
Well, when I first saw Guitarmasterclass, it looked pretty awesome to me, like a place where you can really expand your playing abilities as well as your knowledge in music. So, without much thinking, I applied for instructor, because I already had experience as a guitar teacher. But, GMC is much more than I first thought, it is a real live community in which musicians from all over the world share their knowledge, experience and ideas.
Since I like variety, I like incorporating different styles and techniques in my playing, I wanted to share that enthusiasm with other people, and show every trick I know, as well as to improve myself as a musician, and for doing that, there is no better place than GMC.