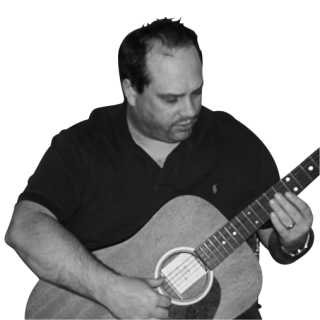 Born on the 27th of February 1967 in Lincolnshire UK, and shortly after moving to Cheshire where I grew up, I became interested in music at an early age. Even before I knew what it was all about I felt a fascination with guitars, pianos and other instruments, no doubt fueled by my uncle who would play me Buddy Holly songs on his guitar. At the age of 8, I successfully convinced my parents that I would die without a guitar and I began to teach myself initially, then took lessons at school, learning nylon strung classical guitar. Used to performing in school bands and concerts from an early age, I also began to learn some theory along with my technique studies, and also took piano lessons for a while. Whilst at school, I studied Music at 'O' Level. At the age of 14, I took an interest in Electric guitar, and never looked back!

Later on, I Joined a band called "Wonderful Life" which did a few gigs around the Birmingham UK area, and played a weird Jazz/Funk mixture of songs. This faded away and was replaced by a recording collaboration with the Lead singer of Wonderful Life. Throughout this period, I also concentrated on recording techniques, arrangement and songwriting.

Playing and Influences
My earliest influences are the greats like Jimmy Page, Gary Moore, Brian May and particularly Dave Gilmour. Recently I have become a fan of Steve Vai. What all of these players have in common is that they almost always put music ahead of technique. Technique is great and important but for me it is a tool to portray the emotion that is there in the music. If I can get the feeling across with one note, why use ten? Technique is of great interest to me when it helps in this goal, but I would never learn technique just for the sake of it - I want to see how it helps with the music! One GMC instructor who shares this point of view is Muris Varajic - and he is an almost daily inspiration to me in this way!

I am also a great fan of musical theory as it helps me to get further inside the music and visualize what is going on. If you thoroughly understand a piece of music, you can get inside it and add it to your repertoire, not as a regurgitated lick, but as a concept that you can adapt and use elsewhere.

At GMC
I joined GMC initially just as everyone else does, to improve my playing. What I didn't expect when I posted my first hello message was an entry into an amazing world of guitar full of kindred spirits, and the best community on the net. As I started helping out in the forums and in other activities, it was and still is always my aim to try and give back to GMC as much as I have got out of it! Every day I learn something new about gear, techniques, theory and I do my best to pass some of it on!