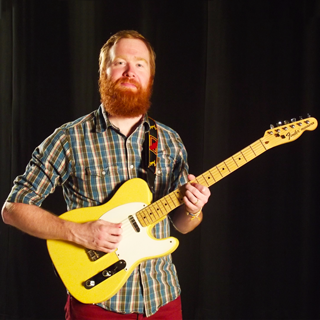 I was born in rural Arkansas and moved to Texas at the age of three. I became really interested in playing music at about 13, though I had started learning prior to that. I also started recording music on an old Fostex 4-track cassette machine about the same time. In high school a whole new world was opened up when I upgraded to Cakewalk on my PC. I joined the school concert band in junior high and continued on through college, where I also had the chance to study jazz, improvisation, and theory. However, I did not pursue a degree in music performance. My career became video and audio production. Consequently, I now teach media production at a university in Wisconsin. Currently I enjoy making music on my own time at my own pace.

In 2007 I released a popular Chicken Picking solo clip on YouTube that eventually led to the production of instructional videos in 2011 and 2013. In 2013 I also released an independent four song instrumental EP.

Playing and Influences
I was born into a very musical family. Instruments were always close by. I started out playing on my dad’s vintage Telecaster and an old Fender Musicmaster. My father mostly played country music, but I also remember hearing the harmonic sounds of Billy Gibbons. My father was influenced by James Burton and Don Rich which in turn had an unavoidable effect on my playing as well. I used to sit for hours watching “Free Bird the Movie” and “Stevie Ray Vaughan: Live at Austin City Limits.” In my late teens it was all about Hendrix, Van Halen, Vai, and Yngwie. At college I was introduced to Jazz studies and John Scofield, which helped transform my playing into fusion. Eventually I came back to my roots with country and began to explore Brad Paisley, Brent Mason and my favorite guitarist, Jim Campilongo.