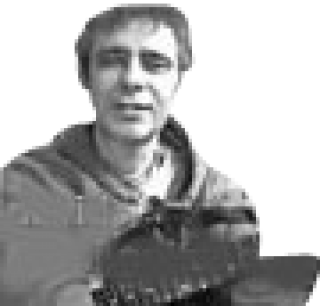 I didn't start playing until my late teens altho' I did mess around a lot on guitars before that, mostly on a friend's guitars - his father managed a few bands and there was always instruments lying around the house. Actually my first 'guitar' was an unrolled coat-hanger which I used to mime in front of a mirror to a few Thin Lizzy tracks - sad eh :) .

Then I got my own guitar, and over the next few years I practised a lot until all hours in the morning and up for work after that. This went on for a few years. I guess I was trying to 'catch up' on lost years once I had got the bug :) . I went through a few guitars starting with a Strat, from Telecasters to Locking Kahler system guitars (can't remember the name), Yamahas, and eventually back to the Strat!

After about 4 years I started gigging with bands and eventually it became fulltime. I played a lot of gigs in Ireland (covers and a few original bands) and eventually ended up gigging in various parts of Spain. I learned how to program music which was used at gigs. Backing tracks etc and this led to doing my own stuff/songwriting.

Playing and Influences
Well my first influence was definitely Thin Lizzy, then I got into Black Sabbath, Pink Floyd, Rory Gallagher/Horslips/Gary Moore, Cat Stevens, The Eagles, The Beatles, Big Country and U2. I started getting into lots of 'musiciany' type of stuff like Uli Jon Roth, Allan Holdsworth, Eric Johnson, a bit of Malmsteen, Steve Morse, Eric Johnson and stuff like that.

I love Blues stuff too and I had a big 'Blues Spell' with Stevie Ray Vaughn and Fleetwood Mac plus a bit of Country, Jazz, and Pop. These days I listen to almost anything and try to learn something from it, from U2 and Coldplay to Buckethead. I can't really pin down any single influences at this stage as I like various stuff from Classical to Rock.

I write and record my own stuff too and I have a little home recording setup. The stuff I write is not totally guitar based as its a mix of all my influences which vary a lot. I play Electric Bass, a bit of Keyboards, Drum/Music Programming and Vocals.

At GMC
I try to cover areas that are not too well covered by GMC already (which is getting more difficult as the material on the site gets HUGER :) . So far I have lessons on Rock, Country, Blues, Pop, and Instrumental. What'll be next? I don't know I have a few in the pipeline.