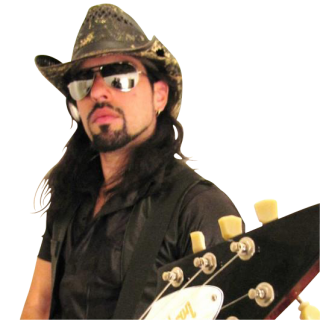 I was 5 years old when I started to play guitar, at first time I tried to imitate the “Queen Live Magic” album, I played air guitar whit a racket of paddle..!

I begin to study at the Conservatory “Juan Jose Castro” , and my long list of professors, I played drums (4 years), I played keyboards (2 years).

Awards
The Cavern Club – Bs. As. awared me for 3 times as a best guitarist.

I have been playing the guitar for 16 years, and I still am just as passionate about working with and playing music!

Playing and Influences
My first record was “Ballbreaker” of AC DC, and it introduced me to the fantastic world of Rock and Roll. Then came Deep Purple, Queen, Van Halen and many more. But my biggest influence was Steve Vai with his pure technique and his limitless mind. Richie Kotzen, Paul Gilbert, Joe Satriani, Jason Becker and Yngwie Malmsteen were big influences too. Also I cannot say enough good things about Slash, Angus Young, Steavie Ray Vaughan, Robern Ford, Zakk Wilde, Brian May, Richie Blackmore, Steve Morse and many more legends of guitar.