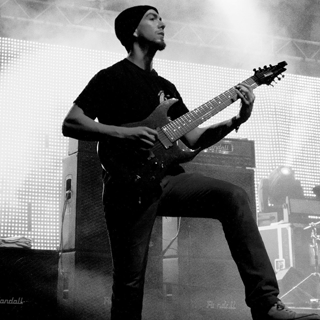 I've been playing guitar since 2002, starting out with bands like Led Zeppelin and Iron Maiden, making my way into Tony Macalpine and Paul Gilbert, then eventually coming across Ben Monder and the world of Jazz guitar, which led to me to The Conservatory of Music at Purchase College where I majored in Jazz Performance. While I was there I studied with Ben Monder, Adam Rogers, John Abercrombie, and Nir Felder to name a few. Though in school for jazz, I took a liking to Heavy and Progressive Metal, e.g., Meshuggah and Cynic, which is what eventually led me to start my group, Ever Forthright (made up mostly of fellow classmates). For the past few years I've been writing, recording, and touring with my band, as well as staying active as possible in the Jazz, Rock, and Metal scene's throughout the world; whether that be an hour performance at the restaurant down the street, or a European tour with the some of the biggest bands in the progressive metal scene. Just before touring with The Haarp Machine throughout Western Europe - sharing the stage with Born of Osiris, After the Burial and Monuments - I won the Mayones/Seymour Duncan International YouTube Guitar Solo Contest, and have since been endorsed by both Mayones Guitars and Seymour Duncan Pickups. Since I'm not touring at the moment I'm taking the time to play and record with as many people as possible in the NYC area and finish the first record for my eclectic group, Stimpy Lockjaw. Having the ability to get gigs, calls for work, make records, and just be a contributing member to the world of music are the most important tools you can have as a guitarist, and I want to make sure I give you the tools to do so, and not end up only playing behind closed doors.

At GMC
I really look forward to giving you the tools to get gigs, make records, and contribute to the world of music in your own fun, unique, and creative way!