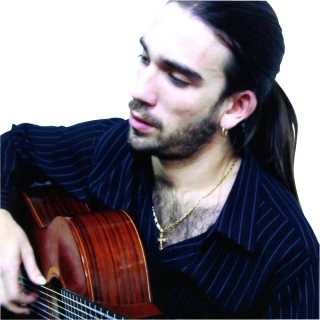 Playing and Influences
I started my profesional career in 1997 and since then I performed in different tablaos and several cultural centers in Buenos Aires and Rosario such as Centro Cultural Borges and Centro Cultural Recoleta, amongst others. Noted performances include iAguas de Fuegoi, iCantaresi and iEl brbaroi.

Since 2003 I have regularly played the guitar for the courses dictated by national and international noteworthy flamenco dancers.

In 2006, together with the group iLos Minerosi, I released an albumcalled eSentiosi. In 2007, I played second guitar in the album iDavid Amaya y gitanos de Buenos Airesi which counted on the collaboration of famous Spanish musicians such as "Nioa Pastori, Josemi and Habichuela.

Studies:
Recently graduated of the Sociedad Argentina de Musicos Escuela Popular de Musica where he did (Argentinean) Folk Music Studies, he studied with well known guitarists in the flamenco world such as Enrique de Cordoba (1992-1998) and David Amaya (2003-2004).