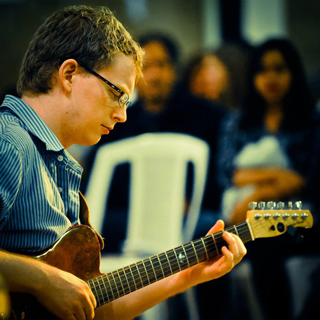 I began playing guitar in highschool, after growing up with the piano from a very early age. Since then, I have gone from playing rock and metal, to obtaining a Grade 8 in classical guitar, and then falling in love with jazz and going to school to study jazz guitar and make it my profession.

I eventually got my Doctorate in jazz guitar performance from the University of Illinois, taught at UI, Western Illinois University and the Interlochen Arts Camp. After living in Brazil during 2011, where I performed in Samba Jazz bands and taught jazz improvisation and theory classes, I took a job at the Leeds College of Music and settled in the UK.

Currently I am a Lecturer of Popular Music studies at the University of Chester, where I coach ensembles, teach guitar and musicianship courses. I continue to travel around Europe, North and South America teaching workshops and performing concerts as a jazz guitarist, both solo and with various groups.

Playing and Influences
My early influences were Jimmy Page and Stevie Ray Vaughan. I was, and still am, a huge Zeppelin fan, and SRV’s playing, at least to me, is some of the most virtuosic and emotional out there. So these two players had a big influence on my rock and blues playing when I first started with the guitar.

As I got more into jazz, I began to explore players such as Wes Montgomery, Pat Metheny and Joe Pass. The usual suspects for most players as they dig into learning how to play jazz guitar.

But, as I progressed and began to play more fingerstyle jazz, I was influenced by the chord masters such as Ben Monder, Lenny Breau, Ed Bickert and Ted Greene. All great players that used different approaches to chords, walking basslines and arranging chord melodies for the guitar.

Lately, I have been exploring more experimental players such as Omar Rodrigues-Lopes (Mars Volta) and Alan Holdsworth, as I continue to push myself in the practice room and take my playing and teaching into new and exciting directions.

At GMC
As my alter ego “The Professor,” it is my job to teach theory here at GMC. BUT, even more importantly, it is my job to make Theory fun and practical for anyone looking to take their playing and theory chops to the next level.

All too often we shy away from learning theory because it’s boring, or we don’t see how this knowledge applies to what we do as players. So, when I answer questions in the forum, post lessons or continue series such as the Analysis Challenge and Lick Challenge threads, my goal is to make theory easy to understand, fun to learn and practical all at the same time.