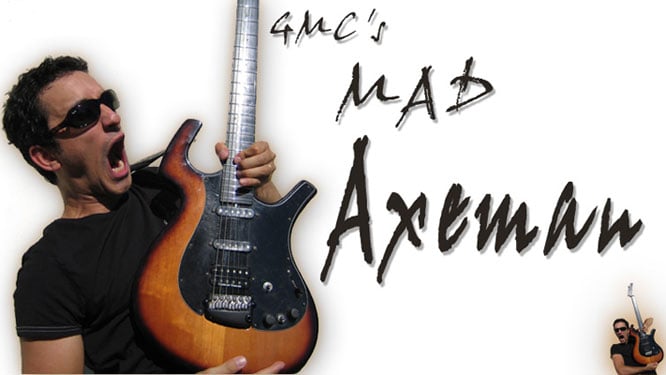 Shredding, rocking and practicing - that's life. That's what we're all here to do. However, since this site now is so crammed with guitar lessons, I thought we'd take a breathing-pause and discuss some other stuff which interests me...

I am going to start by showing you some of my older recordings - you have probably already checked out the trailer videos from the GMC lessons, where you will find some of my newer, guitar oriented songs/solos. If not I suggest you watch this solo video (20 mb), which I am proud of.

I know I shouldn't be saying this about myself - but heck I am a funny guy!

To illustrate this, I am going to present a farce-tune I wrote/recorded, in German!!

Shortly, the lyrics are about the characters of our German schoolbook "Keine Panik", Leo and Nina. The chorus embodies all that is a stupid and meaningless love song:

(hope I remember the translation correctly). Needless to say, I always have a blast when listening to this tune (not to mention how I cracked up laughing when writing/recording) the song.

Since I am a poor singer + and bad at the German language - this will hopefully call for a laugh or two... (especially if you are German). The tune is called Blödman - enjoy!

PS And yes, the chorus is a little inspired by you-know-who.

So what more have I done...? Well believe or not - but I have produced/recorded/arranged som Rap music. And you can stay calm - I am not the one who is rapping - all though you will occasionally here me shout something in the backgound (the stranger it sounds, the more likely it's me you are hearing

Some of my best Hip Hop recordings where made in the deep forests of Swedish Värmland, where I studied for two years. My partner in crime here is "OP" (Ole-Petter Henrisken) from Norway, who did the rapping and wrote the texts.

The song is the perfect illustration of how fortunate a meeting between two polar opposite musicians can be. I had barily even listened to Rap music before - while OP had grown up with it.

I always get a little upset when people start speaking about whether I am rocker, a shredder or what not. I have always been curious of new styles + have changed direction way to many times to belong to a particular style/direction.

Generally, I believe this kind of "style-thinking" is extremely limiting - if you want to develop your own style. One thing is certain, all great guitarists have usually combined different veins of music, which nobody "had thought of" previously.

However, the tune is called Arbeideklassen (means "working class" in Norwegian) - and is a showcase of OP Marxistic ideas - in Norwegian! (If you don't understand anything, I feel with you!)

I must confess - there is also a softer side of me - I especially try to be a soft guy with my girlfriend Maria.

I believe it's extremely important to make your partner in life as happy as possible, so between my arpeggio exercises - I do what I can to make her happy...

However, me and Maria have recorded a lot of songs. This particular tune is actually taken from a love letter she got from some guy when traveling in Bolivia (yeah I'm struggling to keep my cool and be the nice guy

The vocals were recorded roughly to a click (metronome). We were going to re-record them after arranging and recording the backing, sadly we never got the time to do that. So what you hear are the rough, first take vocals...

The chorus of Colon is in Spanish... Ooh and I am warning you, this is a soooft one - enjoy!

Back to the topic - most of you know me as a guitar guy, after all. So I thought I'd share my band Artifex's latest demo with you.

We had huge plans for this material - it was going to be the follow-up of our acclaimed-self-entitled-debute-underground-album.

Sadly, we got slightly "misled" in the recording process by the producer - so the whole thing just resulted in a demo-sounding thing. Anyway, at least we got it on tape - and I am really happy with the clean solo in the middle of tune.

I wrote the song, and we arranged it together (my drummer Gustav Almlöf, on the left - and my bassist Moncho). The tune is called Chocolate - enjoy!

Wait! It doesn't stop there, I have even played in a death metal band!

Previously, I had never played death metal in a band situation - so I was definately in for some learning. It took me quite some time to realise death metal is all about building a maximum amount of aggressive tension - rather than working on smooth flowing melodies.

Winds was our name, and the other guys played - and still do I believe - in famous viking-metal band Thyrfing, as well. We were all angry as hell and played as fast as we could. However, I suspect the other guys where a bit questioning on why I joined the band.

At the time I played a Steinberger guitar (

) - which they referred to as "the stick" + I had short hair and normal clothes, and was actually quite a nice guy. So I guess, once again, I wasn't the standard kind of death metal guy.

Ready to get frightened? Here is "Torture Garden" - the strongest song of our repertoire. Look out for my death-metal-ish solo, based purely on Diminished and Locrian scales.

Warning: if you are new to death metal, you need to cram the volume up heavily, to get the right effect (hint: don't use this tune as background music when seducing beautiful women).

Time to reveal another of my projects - I am practicing vocals and have set up a goal to be a worthy singer sometime in the future. Basically I have come to a point where I start feeling comfortable with the guitar and writing guitar songs. But singing, that's a whole other chapter.

All though I believe I have the potential of writing some cool songs - I currently don't stand a chance of performing a song with vocals properly. And since I get the biggest kicks out of life when facing challenges - I have to learn how to sing.

The tune I am going to present here, is something I wrote/recorded a couple of years ago. Since I have just recently started practicing vocals, I'd say this still is a pretty good illustration of my current level.

What are the lyrics of this tune about? Well most of the time it's musical Dadaism ("Movement originating during and after World War One emphasizing the incongruous and accidental while mocking the traditions of art" - in case you didn't know

Meaning I didn't care to much about the actual words - I just took any combination of syllables that sounded good - and if I couldn't find a word with those, I invented one!

If someone - against all odds - thinks my singing is pretty decent here, I want you to know I did at least 50 takes on every syllable of singing. If I where to perform this piece now, in just one take, you would have throw yourself out of the room pretty quickly... Here is Little Things - enjoy!

Time for some sad news: at the time of writing, my band Artifex has dissolved. The main reason for this is the cold musical climate in Sweden. Making a living of guitar-based music in Stockholm is simply i-m-p-o-s-s-i-b-l-e (please notify me if you know anyone who has succeeded!).

And since I am not a fan of being still on the same old spot - I am now looking for a new band. I'm aiming for something more easily digestible - some kind of rock band. (Don't tell anyone about this: What I really would like, is to be able to sing my own songs, then I would just start a one-man-band with the help of some kind of loop-pedal. I am a do-it-yourself guy, you see.)

Enough said - here is a short excerpt from an Artifex gig in Stockholm. We are playing the intro of the song "The Reliable Blue Line". And it's actually a tribute to one of the subway routes in Stockholm - which we used to get to our rehearsal hall.

Over to something different:

In case you didn't know - I am obsessed with fishing. So I thought I'd share some of my finest catches with you. (In case this seems odd: I wasn't quite sure if this was worth mentioning on a guitar site, but then I thought - what the heck - I might just show you what I got, once we're at it, right? However, you can also choose to skip this section).

Oh I almost forgot - this is a guitar site...! Let' stay at least a little on topic - and speak a about what my current guitar ambitions are - besides giving you the best online instruction possible, of course!

One thing I have been working on for a while - and probably will be for a while, is a new legato approach. I don't think I am the inventor of it - but it feels very fresh to me, and once I master it, I believe it will give me new possibilities.

Let's take patterns like these, and practice them separately...

... you need to work hard on 1) avoiding unwanted string noise and 2) getting enough sound/strength out of your left hand (as always when not using the pick).

Now if you put these kind of patterns together, you get a fresh and unique-sounding type of fast run...

Again, I wish I could demonstrate this for you - but I need a couple of more months to do that. Hopefully we'll have a legato lesson here at GMC.

Well, I hope this illustrates what kind of things are on my practice agenda. Obviously, I don't practice other people's solos and songs that much any longer, instead I am on a quest for new useful patterns/techniques which I hope will spice up my playing and style (such as the one I just showed you).

I have to get working on the upcoming lessons now, but hopefully I have managed to show you a little from my previous interests and musical works...

How to get more Kris info/stuff: