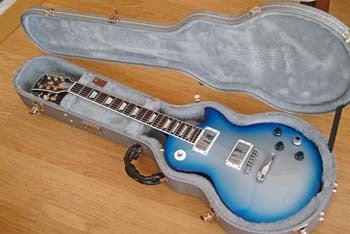 Gibson Les Paul Robot with Tronical Powertune Automatic Tuning System. There is the usual Les Paul three way pickup switch, two controls knobs for volume and another two for tone. One of the tone knobs doubles as the Master Control Knob (MCK) for the tuning system.

Price paid and where it was bought: I couldn't find any still available in the UK so I looked at importing one from the USA but with shipping and customs charges it would have been more than £2000. I managed to find one on the German site Thomann and ordered it Sunday night. It arrived today with no customs charges (European Union) and with free delivery for £1,324 (which is €1777 or $2,597).

I’ve only had it for two weeks but as I’m playing it about three hours everyday I’m getting very used to it. I like the actual weight of the guitar. I used to have an Epiphone Les Paul Custom but I found it too cumbersome. The Robot is based on a studio Les Paul so it’s that little bit lighter and more manageable than one of the big boys. The body has been routered out in places to save weight while still keeping the famous Gibson sustain. I have owned many guitars over the years but I've never had a Gibson before and the sustain is superb. It really does sing out for far longer than the others I have played. The pickups are hand wound Gibson 490R Alnico2 and 498T Alnico5 humbuckers and I'm very impressed with them so far. I'm very, very taken with the sounds from it, in fact I have to keep checking in the mirror to make sure Jimmy Page isn't looking back

I enjoy playing many different styles of music (rock/pop/metal/Scottish or Irish folk etc) but I suppose I’m basically a rock fan. Angus Young is still God to me. As far as versatility of the guitar goes I suppose there hasn’t been a guitar invented so far that is more versatile than this one. As it has twin humbuckers I suppose it wouldn’t really fit in with a country type of sound but with the various tunings it lends itself to most other styles.

The guitar is mainly about the Tronical system, although I can honestly say it would be a very good guitar even without it.

The quality is excellent but then again so it should be considering the price tag.

The build quality is very good. The only down side I can find if is if something went wrong with the Tronical system.

Well I haven't had it for a week yet but I'll put it down for a while so I can tell you a bit about it.
First of all it isn't cheap, it's by far the most expensive guitar I've ever owned (more than twice the price of my Strat) and I had to think long and hard before I buying it because I'm far from rich. In saying that because it's a limited edition it should only ever go up in price so I suppose I'm not losing money in the long run (that's what I told my wife anyway ). I will admit I only bought it because I knew I wouldn’t lose my money but any thoughts of selling it on for a huge profit quickly disappeared when I played it. If this guitar was stolen I would certainly buy another one (well I wouldn’t, the insurance company would )

I thought it was just a gimmick at first and I was dying to actually see if it could tune up properly so when I got it out of the box and charged up the internal battery I found that while it was showing that all the strings were in tune the sound was less than pleasing. I lowered the action a bit from the factory setup (as I actually aim to have a little buzzing on the lower strings because I find it disappears when plugged in) and then I did the intonation adjustments using the auto tuning system (You play the fretted note and then the harmonic and the Tronical system tells you exactly how many turns of the screw are required and in which direction!). When I auto tuned it after I was amazed, when the intonation is set up properly the tuning is spot on. Absolutely pitch perfect. I tried the other tunings that it will do automatically and found them to be perfect too (I still don’t understand how it manages to go from standard tuning to say drop D and not sound hellish because the intonation must suffer but it sounds great).


The "Robot" part to the Gibson is actually the Tronical Powertune Automatic Tuning System. Tronical are a German company started by a guitarist who wanted to be able to keep his guitar in tune easily. The system can actually be bought and fitted to any guitar as they claim they do not drill any new holes in order to fit it. The tuners actually weigh less than standard tuners and so it feels the same as a studio, there is no extra weight in the neck pulling you down like an SG can have. Unfortunately at £666.25 my Strat is going to have to wait until the technology gets much, much cheaper

Basically you can pull out the tone control and strum the open strings and the guitar will tune itself in seconds to standard 440 tuning (or open A, G, drop D, E, Bflat). What I didn't know was that you can also tune to a specific note also. Say you were tuning to a piano player, tune your A string to his pitch and then the system will match that across the other strings!
The system can tune the guitar much quicker than any person can simply because it tunes all six strings simultaneously. It can therefore tune to a different tuning, say E flat for a single song, and then tune back to standard within 10 seconds. The possibilities are endless.
90 minutes of charging via the charger and a standard guitar cable gives full battery power and Gibson reckon it’ll last for 200 tunings.
You can also ditch the tunings that are stored and have all your own customized ones if you wish. I currently have it set so I have standard tuning, Highway To Hell tuning, Led Zep tuning, Hendrix Tuning and drop D tuning. I can get rid of all these and put it back to factory settings at any time or add more custom tunings.

This model is a limited run of only 4000 which means that this guitar will probably become much sought after in the future. I firmly believe that in the future all guitars will have the Tronical Powertune Automatic Tuning System fitted to them so therefore I feel this is truly a bit of history in my hands.
I suppose it is preaching to the choir because I hate Floyd Rose trems anyway but I predict this thing will take a huge bite out of their market. I can't imagine the whole "stay in tune with a locking trem" will matter when you can just pop a button and strum a couple of times to be instantly back in tune. A string change is child's play and not the military style operation required for replacing the strings on a locking trem.
With all that said I have little doubt that a lot people will hate this guitar. In fact they will be eager to find even the tiniest fault with it but it’s because they dislike change rather than anything to do with the guitar itself.


On the down side if something does go wrong with the tuning system it is likely to be very expensive to fix and although you could carry on and tune it as a normal guitar there is not really much point in having it if you have to do that in my opinion. Is it possible that in a couple of years time these guitars will appear on Ebay as "not working" or "spares or repair" as people baulk at the repair costs from Tronical?
That will hopefully force prices down so I can buy another one

Pictures of my beloved who's serial number is just under the 3500 mark: 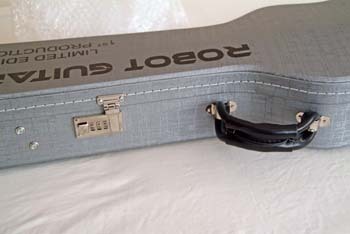 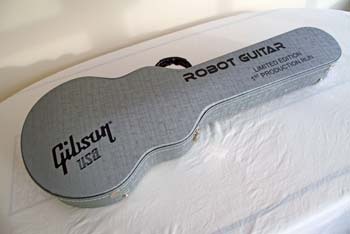 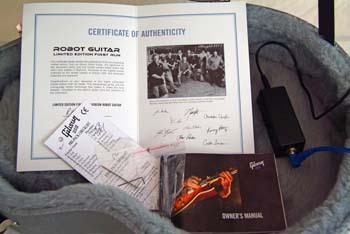 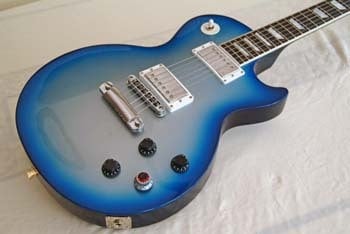 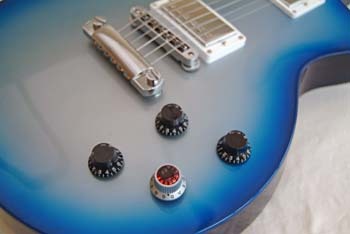 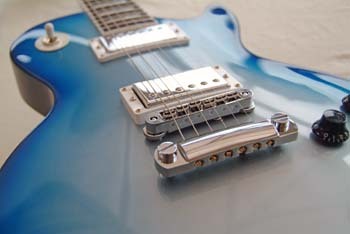 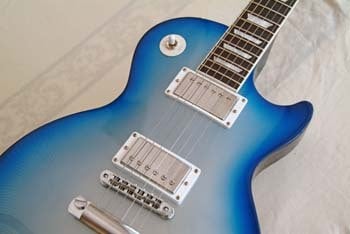 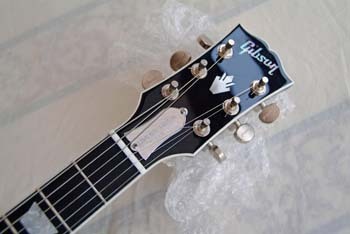 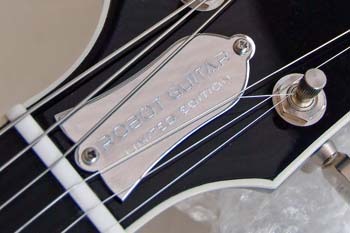 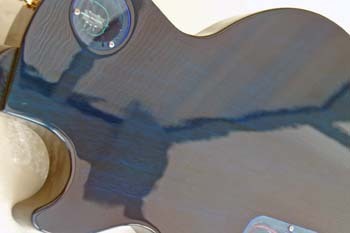 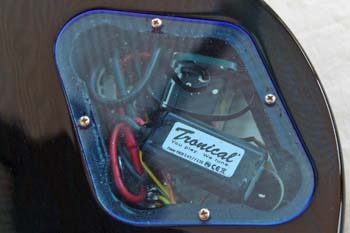 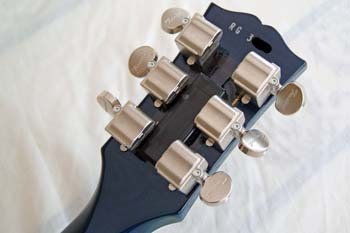 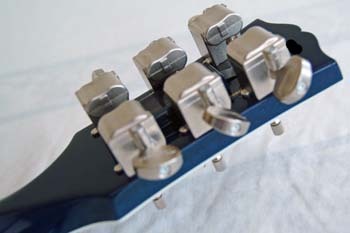