The history of the Fender Stratocaster 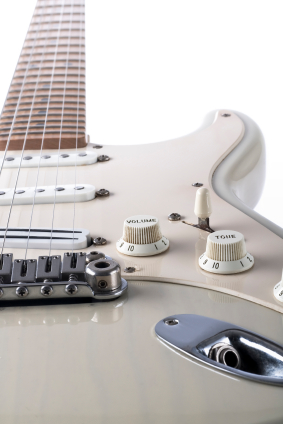 The very first Fender Stratocaster was produced in 1954, and since this time it has remained one of the most popular guitar models with guitar players of all types. Even the mighty Gibson Company cannot boast such a successful instrument, a true icon for generations of guitar players.

The popularity of the Fender Stratocaster is almost entirely due to the bright tone it produces, and it’s comfortable yet stylish body shape. The design has drifted a little over the decades, and a handful of signature models, endorsed by famous Strat players have also been issued. Despite these small changes, Fender have stayed true to the original concept, and maintained the marquee throughout the years.

During the mid 1960s, a guitar player evolved who developed a playing style unlike anything ever heard previously. This player chose a Fender Stratocaster to make their auditory attack upon the world. Nobody can dispute that Jimi Hendrix did more to market the Fender Stratocaster than any other person in history. Unforgettable recordings such as Voodoo Chile bought a completely new sound, and showed the world just what could be done by one man and a Strat. Whilst Hendrix was assaulting the ears of the general public, other influential players such as Eric Clapton and Jeff Beck were also using the Fender Stratocaster, Clapton used the Strat for the entire time he was playing with Cream, and nobody can dispute that the tri of Eric Clapton, Jack Bruce and Ginger Baker pumped out a lot of nose, mainly due to Clapton’s fat sound, produced from his Fender Stratocaster.

Commercially, the early days of Fender were a huge success, and it was not long before the large corporations within the music industry started to take a long, close look at this profitable little guitar making company. Eventually, in 1965, the CBS Corporation bought the entire Fender Company, for a reported $13 million. Unfortunately, CBS rested on the laurels of the original Fender Company, and produced nothing particularly innovative for 20 years. Players began to drift away from the fender brand, as build quality diminished and rival manufacturers released more modern instruments. Finally, in 1985, a group of employees made the decision to buy back the Fender Company from CBS, and return the brand to its former world class status. Leo Fender returned, to help re-model and re-build the Fender brand, and the future looked rosy indeed.

The actual body shape of the Fender Stratocaster has changed little since the original batch of 20 was produced in 1954. The design was based on the successful Fender Precision Base, and was manufactured from either two or three pieces of cured Ash. The original sunburst models used a two tone effect, although the modern models now use three tones to achieve the high quality sunburst look that we see today. Although most early Stratocasters were either produced as blonde (lacquered wood) or sunburst, there were a handful of other colours available. In the 1960s Fender introduced more standard colour for the Stratocaster, and today the Strat is available in a large range of either solid or transparent colours, as well as sunburst tones and plain wood.

The definitive Stratocaster sound was produced by a set of three single coil pickups, which are selected using a three way selector switch. This aspect of the Strat design has changed very little through the years. This meant that the Fender Stratocaster was one of the most versatile guitars available in its early days. The Strat was able to produce three very distinct sounds. The guitar player could switch easily between pickups, moving effortlessly from a more rhythm suitable tone, to the distinctive Fender Stratocaster lead guitar sound. Very soon, players such as Dick Dale had discovered that by wedging the selector switch between positions, they could activate two pickups at the same time. This added a whole new degree of versatility to an already capable guitar. Eventually, Fender picked up on this idea and changed production models to a five way selector pitch, which included hum cancelling circuitry.

Fender introduced the Fender Custom shop during the 1970s, and guitar players were able to specify additional upgrades, or modifications from the factory norm, when purchasing their Strat. This directly lead to the release of the famed signature models, as influential guitar players of the age began to have their custom made Strats built. Fender would often liaise with these guitar heroes, and produce short run production models with the same modifications. These became known as the signature series and include designs from such affluent players as Eric Clapton, SRV (Stevie Ray Vaughan), Mark Knoplfer and Eric Johnson.

Fender also tended to re-introduce vintage models, or revitalise older design concepts that had been discarded, to create a more varied product line. What came about was the introduction of the Vintage and Deluxe models, most notable the American Vintage 1957 Strat and the Fender Deluxe Strat.

There have also been some rather more unique Fender Stratocaster models produced, none more so that the collaborative effort between Fender and Roland which produced the interesting Strat/Midi guitar hybrid. Although not a great commercial success, the design certainly proved that Fender were capable of embracing technology and incorporating it in to the Stratocaster brand.

The Fender Stratocaster is still one of the most popular guitars produced, when Leo fender passed away in 1991, he had left his mark on the world in the form of one of the greatest musical instruments every mass produced. Interestingly enough, Leo Fender never did learn how to play the guitar, although there can be no doubt that he certainly knew how to design them.