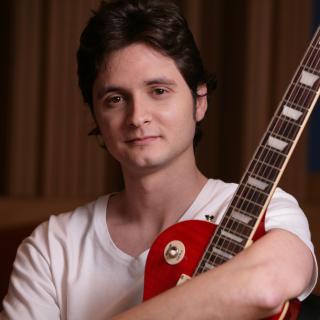 I started playing the guitar at the age of 8. My father taught me my first chords and songs. A week later, I started taking lessons with a private tutor. At the age of 13 I decided to take it to the next level, so I went to a professional institute, where I received my Teachers diploma. I kept on studying, focusing on different styles, such as Tango, Jazz, Rock, Blues and Folk, with the best teachers I could find nearby. In the meantime, I played in several bands, which helped me improve my techniques. I satisfied my curiosity in the subject by reading tons of books and by asking a lot.

To get to the point I am in nowadays, that is composing and recording music for TV and advertising, I entered in TECSON, a recording and post-production school, in which I got to know each tool and technique required for the job.

Playing and Influences
My first influences were Argentinean Rock Bands, such as Seru Giran and Luis Alberto Spinetta, and hard rock bands such as Guns n Roses (I also dreamt about becoming Slash hahaha). Then, when I took my career more seriously, I got interested in Argentinean Folk Music and many Guitar Classical Composers, such as Andrs Segovia, Francisco Tarrega and Fernando Sor, among others.

At the age of 15, I heard for the first time a song by Yngwie Malmsteen, and I fell in love with his style, so I went on listening to every Guitar Hero, such as Satriani, Vai, Gilbert, Kotzen and Howe, among others.

As time went by, I focused on Gilberts style, as well as Howes, Saracenos and Sterns style.

At GMC
I always say that inspiration is the key ingredient when you are learning and working on something new. I take this as a learning process and a chance to inspire everyone at GMC to go further into their studies. Im happy to be a part of this family.