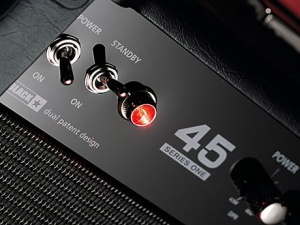 Made in 2009 this 45W 2x12 combo is designed and engineered by Blackstar Amplification UK. It's built in Korea to ensure a "fair" retail price.

Usually I'm into vintage looking combos (think Fender-ish), but this the without a doubt the best looking box I've ever seen! Great attention to detail have been paid.

- Emulated Line-Out (both jack and XLR)

Comes with a 4-way footswitch for changing between the 4 modes.

Equipped with two side handles for easy carrying.

I can't find anything missing. For the price you don't get this many features anywhere else.

Some people might have liked a reverb, but that's really not needed.

I play a lot of different music and that was one of the main reasons I chose this amp - the versatility.

It really is an all-in-one box.

It takes some time getting to know the amp. There's a lot of controls and all of them change your sound in some way. But once you're familiar with everything it's no biggie.

The tones I've been able to dial in basically covers every amp I've ever heard. Both clean and overdrive sounds great.

The DPR lets just adjust the effect to any value in between and including 4.5W and 45W.

I was surprised at how good it sounds a 4.5W, being able to get great tones and lots of gain at apartment volume levels. Even though it can get really loud at this setting too.

There's lots of headroom on every setting (if you crank the volume controls just right), but the 45W setting is of course greatest. I've tried to turn everything (and by everything I mean pre- and power-amp volume) to 11 and it gets louder than anything I will ever need (very loud). And that without any loss in definition.

Instead of having 1 amp for home, 1 for practice and 1 for gigs this one does it all for me.

The ISF works in conjunction with the equalizer. First you dial in Treble, Mids and Bass and then you adjust this control. Clockwise it's supposed to be UK-influenced and counter-clockwise more of and american sound.

All I can say is that it works. You know how some amps tend get muddy when playing certain chords or when adding gain? Turning the knob the american way the sound tightens up bringing back the definition you need. On the other hand, if you need those big sounding chords, just turn it to the right and everything widens.

Now to the lacking parts:

When bedroom practicing the highs tend to be a bit agressive. This haven't proven to be a problem in a band situation though, more of an advantage to easier cut through the noise.

The Super Crunch mode has some noise, but nothing that can be heard when playing. This is acceptable, it is the lead channel after all.

If you wanna play death metal and the likes it probably doesn't have enough gain. But then again, you don't want a silly combo, you wan't a huge stack through which your power chords will kill people!

As this indeed is the case, have a look at the Series One 200 head with a matching cab, it's massive!

A last note on the sound: This combo isn't for people who want an amp with that defined trademark sound. You can get close to more or less everything, but if you only want a Marshall or a Mesa, get one.

Even though it's made in Asia this doesn't show in build quality. It's built like you would expect any great amp to be. So I do believe proper products can come from cheap labour, it's all about the company's control on the manufactoring.

Can't tell about live or long term use (as I've only owned it for a few days, no gigs), but so far it screams quality.

Also I brought it for band practice, it took two to easily carry it to the car in spite of the weight of 30kg. On the way home we hit a tree (the amp lying in the trunk of the car) and it's still functioning just fine! Ah well, it's not like the collision did any real damage to the car either, but I thought it was worth the mention.

Well, I love this amp. Sound is great, looks are great and quality is great.

If it was stolen I would definately get another one.

If I could have any amp of my choice, I would probably pick a Mesa Boogie. But this (or the Series One 200) would come second.

It really has nearly everything I need. As mentioned I see this as many amps-in-one, and that is a trait I like. I couldn't be happier with my choice.

Go try it out.