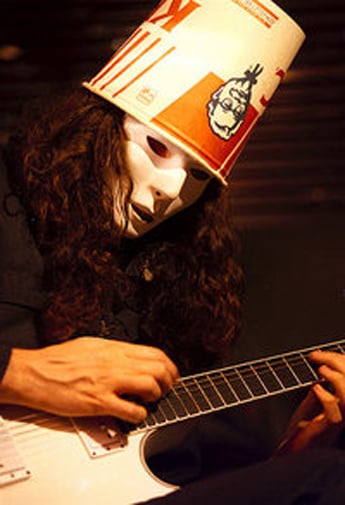 Buckethead was born in 1969 with the name of Brian Carroll. He is an American guitarist who is known for wearing a plastic mask and KFC Bucket on his head while performing. His style of music is very diverse from thrash metal, funk, electronica, and jazz. He is best known for playing guitar, but plays many instruments such as Bass guitar, banjo, ukelele, piano, keyboard, and drums. Buckethead has worked with many famous music artists such as Bootsy Collins, Les Claypool, Guns n' Roses, Bernie Worrell, Iggy Pop, Serj Tankian, Saul Williams, Viggo Mortensen and Bill Laswell. He has also wrote music for some major movie productions such as Saw II, Mortal Kombat, and even created the Power Rangers Theme Song for the Power Rangers Movie.

Buckethead began to play guitar at the age of twelve but did not get serious about play until he was fifteen. He began to take lessons from Paul Gilbert who at the time was only eighteen.

“He was a great student. He was really young. Actually, we were both really young. I think I was about eighteen. …He was about fifteen at the time. Of course if your fifteen, you can’t drive, so his Mom used to bring him down to the lessons. He was super fast even then and he wasn’t wearing a bucket. He was just a normal kid. I saw him in an airport a couple of years ago. He had super long hair so I didn’t recognize him at first. I just figured it was another musician who wants to say hello. As he got closer, I realized he was the kid I used to teach that turned into Buckethead. He was super cool. It was nice to see him.” - Paul Gilbert

The Band Deli Creeps was created in 1988 and featured Maximum Bob for vocals, and Pinchface on drums. They continued to perform localy up until around 1992 when buckethead met Bill Laswell by the help of drummer Brian Brain Mantia. Buckethead made many appearances on the Laswell albums. Also in 1992 Buckethead, Bill Laswell, Brain, Bootsy Collins, and Bernie Worrell created the group Praxis.

Buckethead released an album called Giant Robot witch is named after the japanese tv series Johnny Sokko and his Giant Robot witch Buckethead is a fan. The Album features guest appearances by artists such as Iggy Pop and Bill Moseley. buckethead also auditioned to play for the Red Hot Chili Peppers shortly after John Frusciante left, but did not get the position. 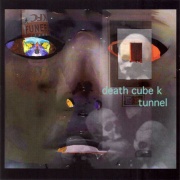 Death Cube K is an anagram of "Buckethead" he created by Tom "Doc" Darter to circumvent legal complications with Sony Records. Death Cube K is a separate entity that looks like a photographic negative version of Buckethead with a "black chrome mask, like Darth Vader.

In 1995, Buckethead didn't release any solo albums, but between 1995 and 1998 he collaborated with several artists like Jonas Hellborg and Michael Shrieve in the album Octave of the Holy Innocents and Bill Laswell in Ambient Compendium.

Later in 1996, Buckethead released a solo album called Day of the Robot with the collaboration of DJ Ninj and another album in a small label called NTT Records, called Giant Robot.

In 1999, Buckethead another album, a collaboration with Les Claypool from the band Primus entitled Monsters and Robots, currently the best-selling album of his career.

Also this year Buckethead started 3 new projects, the first is called Cornbugs with Bill Moseley, Pinchface, and Travis Dickerson, they released their first album called Spot the Psycho. Another project is called Cobra Strike with Pinchface, "Brain", DJ Disk, and Bill Laswell, they released the album 13th Scroll. The last project was with the actor Viggo Mortensen and released 3 albums called One Man's Meat , One Less Thing to Worry About , and The Other Parade.

Buckethead became a member of Guns N' Roses from 2000 to 2004; however, the band only toured in 2001 and 2002 during this era. Despite this, Buckethead's guitar parts were found intact on leaked Chinese Democracy tracks, it is uncertain if they will be present on the final product.

During the time Buckethead was with Guns N' Roses he released several solo albums as well as starting a new project with Les Claypool, Brain, and Bernie Worrell called Colonel Claypool's Bucket of Bernie Brains releasing their only album The Big Eyeball in the Sky.

Released in November 2006, the cross-console video game Guitar Hero II features Buckethead's song “Jordan” as an unlockable bonus track. Although the song has been performed live in the past, the video game version is the only known studio recording of the song. However, the Guitar Hero II version contains a special solo specifically for the game. Since late 2007, Buckethead has been known to perform the Guitar Hero version of Jordan within his concerts, including the solo.