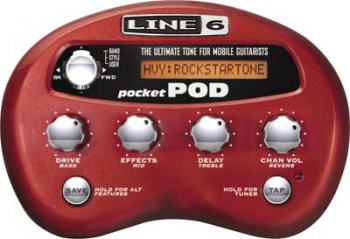 This little device gathers tons of great sounds within it's small yet useful shape. It contains over 300 different presets, and all of them are editable. The main functions are all available through the different knobs and buttons, and are pretty easy to use.


It's portable so it can be powered using batteries or an AC adapter.


Preset sounds can be browsed using different menus, which include User presets, Bands and Styles.
Once you find a sound you enjoy you can take it from there and tweak it as much as you need to make it your own, changing settings such as:


Another useful feature is that this little gadget includes a customizable noise gate, which comes in really handy with the high gain amps.


There's a master volume level that is really needed when using pocketpod with headphones, otherwise your ears may bleed if you change from a clean setting to some crazy high gain setting, so it's better to set it on low volume and increase as needed to avoid bad surprises when changing settings.


This little POD comes with a handy "Tap" button that allows tweaking effects such as delay easily tapping your thumb at the rythm of your backing.


Last but not least the unit allows us to tweak everything using a handy program called Vyzex PocketPOD 1.05 .That's the latest version, available at Line6 downloads site.


Not only does Pocketpod allow us to create unlimited sounds but it also can be filled with tons of custom tones created by users around the world, which you can get at Customtone. You just have to remember that only POD II tones are suitable for Pocketpod.


One of the amp settings is actually a Tube Preamp, that comes in really useful when all you need is a multi-effect unit, without coloring your sound too much. Thumbs up for that feature!


Though it is the little brother of the POD family this little fellow has all the connections you may need for a straight-forward practicing device: 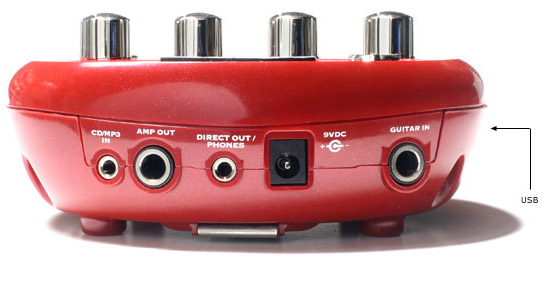 Input Jack for your guitar (thank God!)
Line out (Useful to connect to your amp)
Secondary line out/headphones mini-jack out
CD/mp3 in, useful to jam along with your favourite bands/backings
USB to USB mini cable connection. WARNING: this one is NOT suitable for recording!. It's used ONLY to tweak the settings via computer and/or save your tones or add new tones downloaded from the net.


As for a complete list of featured Amps/Cabs/Effects, take a look ahead!

Amp Models based on:

Cabinet Models based on:

This device has a small learning curve, I'd say that after spending an evening playing around, tweaking and trying it's basic features will be forever understood.


On the other hand there are certain functions such as changing noise gate or resetting the device that might need an extra look at the manual. Talking about the manual, it's pretty small, but does it's job quite well.


I'd say the trickiest part is understanding how the Vyzex software works to change settings using the computer or add new tones via Customtone. Not that it's hard, but could be a bit easier.


There are lots of extra manuals regarding pocketpod/Vyzex available to download at Line 6 site though, so there should be no problem for whoever decides to become a master tone crafter!

Well, nothing is perfect is it? Let's see a few things that could have been done better:


- Can't change cabs without using the Vyzex software.
- Auto Wah effect is only available through the Vyzex software.
- Can't record via USB. This one is a major flaw. But if you have a good sound card you can still record using either of it's line outs. If you don't then expect latency issues.
- Some of the functions are only availble through a combination of buttons + knobs that are tricky to remember/use. The device is small and not every function can have it's own knob. Most common functions are straight forward though.
- This fellow eats batterys! Which leads us to another con:
- Power supply not included. Any 9VDC will do though. Better get one!
- Many of the factory settings are kind of a "show of" about what this modeler can do, but not really worthy to actually play. Now this is not a big drawback, because many of them are a good base to begin with to tweak your own sound.

This is a solid gadget, that truly delivers what is expected: a reasonable good sound, specially through headphones, and also through a clean amp channel, to practice and jam for hours non-stop.


Easy to use, Portable and solid, this is a POD for the ones who are on budget or on the go!. Getting one of this will certainly not be a mistake, given it's price tag.

I wouldn't like to end this review without mentioning some of the other little devices out there that are market competitors as of today: mainly Korg units such as Pandora PX4D and PX5D. Both of these are serious contenders that also deliver great sounds AND real recording capabilities via USB. Make sure to check them out too.