Slayer is an American Thrash-Metal Band. Slayer is one of the Four Founders of the Thrash Metal genre: Metallica, Anthrax ,Megadeth and Slayer are known to invent Thrash-Metal. The Band Members are Kerry King(g),'Jeff Haneman(g),Tom Araya( 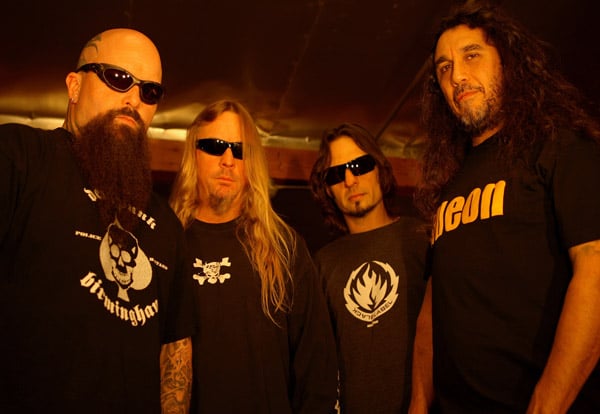 Slayer was formed under the Name Dragonslayer in 1981 by guitar-playing friends Kerry King and Jeff Haneman. Together with Bassplayer and shouter Tom Araya and Drummer Dave Lombardo they covered Iron Maiden and Judas Priest songs on partys in southern California. On one of these Shows they were discovered and signed by Metal Blade Records. They released Classical Thrash-Metal records such as Reign in Blood, Show no Mercy or South of Heaven and became worlds biggest Extreme-Metal band. Unlikely to Metallica, who started with the same Musical style in the same area, Slayer stick to their roots and continuesly play agressive Thrash Metal until today.

Slayer plays a heavy and extreme version of Thrash Metal. Trademarks are high tempo, dissonant solos, Doublebass Drumming and staccato one-string-riffing. The average speed of Slayer songs is 250 bpm. Drummer Dave Lombardo was the first to use two basedrums instead of one which earned him the title 'godfather of doublebass'. Tom Araya's shouting style switches between high scream to (always clean) shouts. It is remarkable that he is playing bass at +200bpm and singing at the same time. The lyrics of nearly every Slayer song are about gore, serial killers, Satanism, religion and warfare. That fact plus several songs about Nazis made a Controversy about the Band.

Slayer earned bat reputations like beeing accused of holding Nazi sympathies, due to the band's eagle logo or due to their infamous song Angel Of Death,which is about KZ-doctor Joseph Mengele. The band members were asked about these accusations, and have stated numerous times they do not condone Nazism, and are merely interested in the subject. They are also critizised for their satanic lyrics, but the fact that none of Slayers members is a Satanist (in fact Tom Araya is a Believing Christ) silenced their crtiticers. 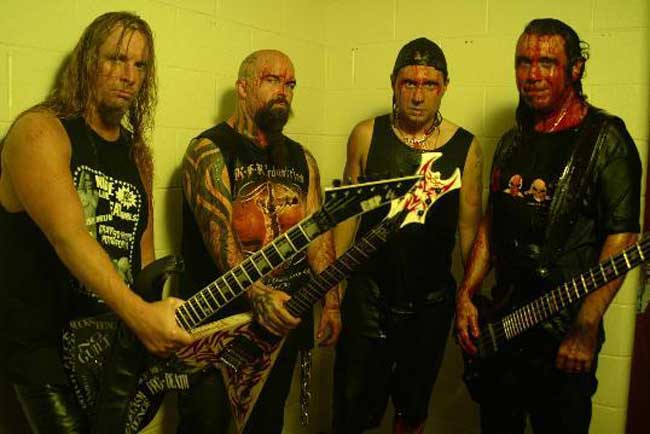