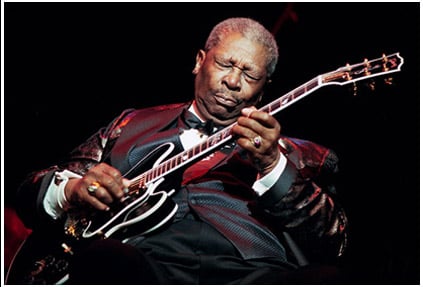 King has taken part in more than 60 albums, with different artists or on his own. He has won 14 Grammys and received dozens of awards and honors over the years, and he still performs several nights a week. He belongs to the Rock n' Roll Hall of Fame, and stands in the 3rd position of Rolling Stone's "100 Greatest Guitarists of All Time".

Riley Ben King, known as B.B. King, was born the 16th of September of 1925 in Itta Bena, Mississippi. His father abandoned the family and his mother died when King was just 9 years old, so he spent the rest of his childhood living with his grandmother in Kilmichael, attending school (which he didn't finish), and working at the cotton fields.

When he reached the age of fourteen he got his first guitar, and started singing gospel songs. One year later his grandmother died, and he went to Lexington, to live with his father's new family. Country music, gospel and the rich Mississippi Delta blues heavily influenced his style these early years.

Come 1946 he decided to move to Memphis, with his guitar and a couple bucks in his pocket. There he lived with his cousin Bukka White, famous Delta blues singer and guitarist, who taught B.B. King the fine art of playing the blues. Soon he began to work as a DJ in Memphis radio station WDIA, and that's how he got the nickname "Beale Street Blues Boy", which eventually evolved into "Blues Boy" and later the worldwide known "B.B." that has accompanied him for life.

In 1949, being 24 years old, King recorded his first four tracks with Bullet Records, and later he signed with RPM records, recording lots of tracks the following two years which eventually led to B.B. King's first top of the charts single "Three O'Clock Blues" in 1951, after which he went on the first of his long, massive tours.

In 1953 he moved to Houston where he played with Bill Harvey's band. When Bill had to stop due to helth problems he took the lead. By that time B.B. King was famous acroos the nation, in 1955, he used to go on tour 300 nights a year playing for hours each time. White teenagers started to pay attention to "black" music, and he became a main-stream success, influencing a legion of guitarists & artists to come, including a young Elvis Presley who used to attend his shows as often as he could. 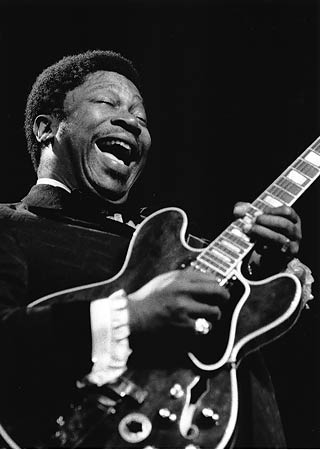 In the early 60s B.B. King signed with ABC-Paramount records, and kept releasing top selling songs such as "Sweet Sixteen" (originally from Joe Turner), "Got a right to love my baby" and "Partin' Time".

In 1964 he released one of his all-time best albums, the "Live at the Regal", recorded in Chicago, regarded as one of the greatest ever blues albums. later that same year he released another famous track "How blue can you get", followed by "Don't Answer the Door" and specially "Paying the Cost to Be the Boss", which reached top ten a couple years later.

In 1969 he recorded "Why I sing the blues", and it was in that same year that B.B. King would release what is probably his most famous track to date, the one that made him world-wide known and forever regarded as one of the best blues men taht ever existed, "The Thrill is Gone", which got high in blues and pop lists alike.

Although the 70s were not kind years for bluesmen, B.B. King managed to stay in shape and kept getting good sales in those years. Hits such as "To Know You is To Love You" and "I Like to Live the Love" were amongst the most popular songs from the early 70s.

Come 1976 he released some duets along with Bland, and later in 1978 he joined the Jazzy Crusaders and released "When it all comes down" and " Never make your move too soon". He also released the country sounding album "Love me tender", but it's not regarded as one of his best though.

From the 80s to Present Days 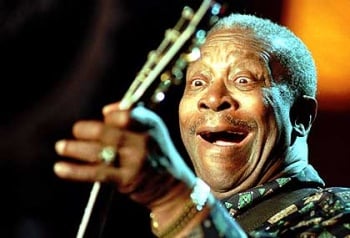 B.B. King released some remarkable LPs during the 80s such as "World Somewhere" (1981) and "My guitar sings the Blues" in 1986. One year later he received a Grammy Award for his dedication to music.

Though he didn't record quite as much as in the past he kept going on frenzy tours, playing over 300 gigs per year. He also made some unforgettable collaborations, such as the one with U2 in "When Love Comes to Town", or 2000s awesome album "Riding with the King" along with Eric Clapton, with whom he also went to Crossroads Festival in 2007.

Thinking of retirement, B.B. King had gone on his "Farewel Tour" during 2006, but truth is he reappeared several times after that in Brazil, Crossroads festival and Chicago Blues Festival 2008.

B.B. King was actually born with built-in ultimate gear: his fingers! But if we go beyond that little detail, next thing everyone notices is his beloved "Lucille" guitar: Lucille is a modified black Gibson ES-335, a semihollow electric with two humbuckers, equipped with Gibson B.B. King Signature strings, Signature Gauge .010 .013 .017p .032w .045w .054w.

The name of the guitar comes from a gig back in 1949. A couple guys there got into a fight over a woman, and they ended setting the club on fire. B.B. King scaped, but then he realised he had forgotten his guitar inside. Risking his life to save the guitar, he asked what the name of the woman that the two men were fighting for was, and it turned out to be Lucille. Ever since he has named his guitars "Lucille" (there are several "Lucilles"!), and Gibson even released an official model resembling B.B. Kings modifications, in 1981. These modifications include the fine-tuner tailpiece, the semi-hollow body with no soundholes, the varitone 6 way control which enables a huge range of different tones and, of course, "Lucille" engraved in the headstock.

B.B. King's preferred amp is a Lab Series L5, which is a solid-state 2×12 combo, but he also is known to use Fender Twin Reverbs with Altec Lansing speakers when he doesn't have a Las Series 5 available.

King's magnificent voice goes through a Shure SM58 microphone, wedge monitors, and side fills. His amp is miked with a Shure SM57. 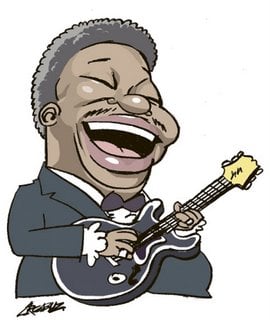 His main influences were bluesmen T-Bone Walker, Lonnie Johnson, Blind Lemon Jefferson, Elmore James, Bukka White (who was his cousin), Robert Lockwood ,Lowell Fulson, and also jazz players such as Charlie Christian and Django Reinhardt. A mixture of Blues and Gospel in his early days, spiced with some Country & Jazz are the key to his amazing, emotive, articulate licks.

Famous for his mastery of vibrato finger technique and sliding bent notes, B.B. King is actually someone who has influenced generations of guitarists and artists such as Buddy Guy, Eric Clapton, Stevie Ray Vaughan, George Harrison, Jimi Hendrix and Jeff Beck, to name just a few.

B.B. King is a living legend, an American icon, the "King of the blues": someone to be admired and remembered forever.

- Married twice: in 1944 and 1958
- Divorced twice
- Father of 15 children from 15 different women, not his ex-wifes.
- Member of the Rock and Roll Hall of Fame
- Diabetic
- He likes gambling
- He has two honorary doctorates in music from Yale and Brown
- Vegetarian
- He is very active in guitar workshops & seminars, and is very keen on teaching guitar.
- He is a Licensed Pilot
- He doesn't smoke, nor drink
- He owns clubs in Memphis, L.A. and NYC 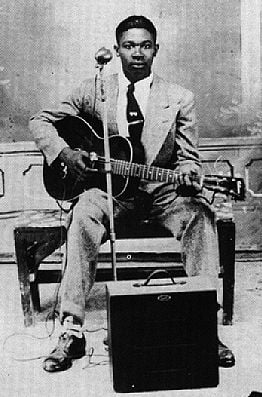 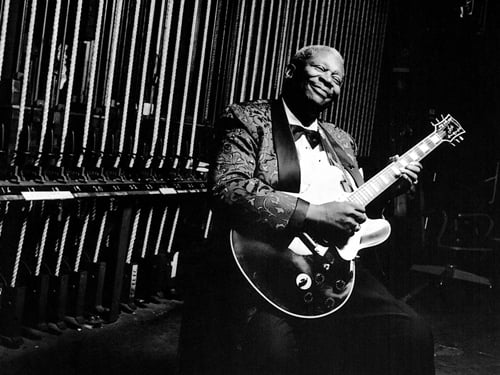