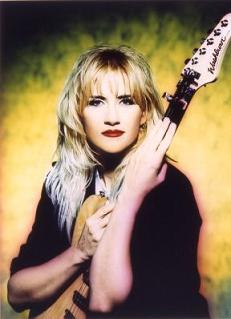 The 80’s was the time of the male dominated ‘Shred’ genre of Guitar Playing, but with one notable exception……… The fleet-fingered and digitally dexterous Jennifer!!!

Jennifer was born in Upstate New York. She got her first Guitar at age 8, having been inspired by her sister who already owned one. Other big influences from around that time were The Beatles and The Monkees. At age 9 her Family relocated and she found herself in San Diego, California.

In 1979 Jennifer enrolled at the Guitar Institute of Technology. It was here that she met and became good friends with another aspiring student Steve Lynch (later of Autograph) and it was through him that her interest in the newly practiced form of ‘Two Handed Tapping’ was acquired. Batten took this style and perfected it like no-one else at that time. She later wrote an instructional book on the subject called ‘Two Hand Rock’. Once she graduated from GIT she put herself through a rigorous practice regime whilst, at the same time, she also became a teacher at GIT and played in several local Bands to scratch a living.

Her ‘tapping’ version of John Coltrane’s ‘Giant Steps’ appeared on one of American magazine Guitar Player Monthly’s compilation CD’s. John Stix wrote that it was considered by her peers to be the “scariest and most requested cut on the disc."

At one point, Jennifer was playing in 6 different Bands and covering many genres of music, including Fusion, Funk, Rock and Metal. It was at this time that she was chosen from over 100 other Guitarists to become Micheal Jacksons Guitarist for his upcoming 18 month Tour. Instead of trying to secure a tryout right away, Batten took an uncommon approach, she secured her tryout on the last possible day -- that way, she would have as much time to learn and perfect the King of Pop's repertoire. Her plan worked and she secured her spot touring for the next year and a half.

She prominently appeared in the video for "Another Part of Me" after undergoing an image makeover, which saw her transformed into a peroxide-hairsprayed guitar goddess (she even sported a Mohawk for a spell). 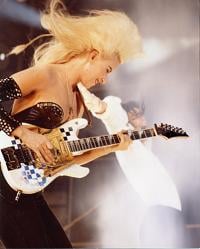 She played for a total of 4.5 million people on Jackson's first solo tour, the ‘Bad Tour’. In the following years she joined Michael on his ‘Dangerous Tour’ and also the 1997 ‘HIStory Tour’. On stage with him during the Half-Time entertainment at Superbowl XXVII she played to the largest audience in televisual history, an estimated 1.5 BILLION people!!

After the Grand Finale of 1989’s ‘Bad Tour’ she began working with renowned Producer Micheal Sembello (also guitarist for Stevie Wonder) on her Debut Album. (Sembello also wrote and performed the hit song "Maniac", which was featured in the soundtrack for the film ‘Flashdance’).The results can be heard on ‘Above, Below, and Beyond’. Her second solo record ‘Momentum’ (recorded as ‘Jennifer Batten's Tribal Rage) was released in 1997 and is heavily influenced by World Music.

In 1998 Jeff Beck asked Jennifer to join his band. She spent three years recording and touring in support of his albums ‘Who Else!’ and ‘You had it Coming’. Tour dates included many dates with Sting.

Although she enjoyed a relationship with Ibanez in the earlier apart of her career she is now a Washburn Endorsee. Her Guitars all feature Seymour Duncan Pickups, mainly JB Jnrs and also the 'Duckbucker'!
She also uses a Stuart Box Doublewidth Neck Guitar for some of her tapping Pieces.

Effects consist mainly of Digitech products with Marshall being responsible for the Amplification.

She was also featured in "Hot Guitarist's" video magazine. Between 1994 and 1999 she also joined ‘Dave Rodgers and Domino’ for a few Eurobeat songs "Sun City", "Music For the People", "Fly" and "Woa Woa Woa" featuring her guitars. However, though uncredited, her writing and performing skills appear in several other songs under the A-Beat-C label. Live Eurobeat appearances are limited to playing at the Tokyo Dome with ‘Dave Rodgers and the Queen of Hearts’. 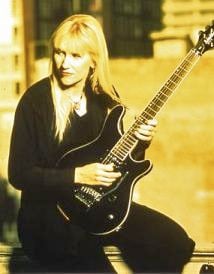