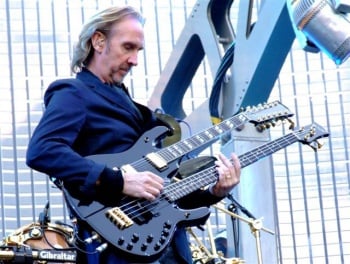 Michael John Cleote Crawford Rutherford (born 2 October 1950 in Guildford, Surrey) is an English musician. He was a founding member of Genesis, initially as a bassist, 12-string guitarist, and backup vocalist. In later incarnations of Genesis, he assumed the role of guitarist. He also fronted Mike + The Mechanics.

Rutherford took over all guitarist roles for Genesis, in the recording studio, after the departure of guitarist Steve Hackett. His style, while not as distinctive or quite as complex as Hackett's, is very melodic and creative, containing textural and minimalistic structures. On tour, he would alternate between guitar and bass on live shows with touring-only guitarist/bassist Daryl Stuermer. Stuermer would typically play all of Hackett's guitar parts and play bass on most songs from the post-Hackett era.

Rutherford's bass lines are known for being tastefully constructed as well as showing a great deal of technical innovation and skill. His bass lines from early Genesis were especially impressive in the rising progressive rock movement.

Rutherford was also noted for his use of the 12-string guitar. A distinctive sound of early and classic Genesis recordings was the double acoustic twelve string playing of Rutherford intertwined with that of Anthony Phillips, and, later, Steve Hackett (additionally, keyboardist Tony Banks would occasionally throw his own 12-string into the mix). Genesis "classic" recordings often featured simultaneous 12 string guitar and Dewtron "Mister Bassman" bass pedal synthesiser playing by Rutherford. He used the famous Moog Taurus bass pedals as well. Often, bass guitar, 12-string guitar, and bass pedal playing would feature in different sections of a single song, "Supper's Ready", "Firth of Fifth", and "The Cinema Show" being good examples of this. He often played a double necked instrument, custom built from a separate Rickenbacker hollowbody 12-string and 4001 bass. Rickenbacker later issued double neck bass/guitar combinations with 4080/6 and 4080/12 models. However, Rutherford had the guitar in the top position rather than the 4080's stock guitar on bottom. He later had a custom Shergold double neck made with Mike requesting the body be modified so that each neck could be detached and played as a standard single neck instrument.

Rutherford played mainly Rickenbacker and Shergold basses. He also developed the idea behind the M-Series Steinberger guitar with the help of English luthier Roger Giffin and he used this extensively in the '80s and during The Invisible Touch Tour with Genesis. In the earlier years of Genesis he used to play bass pedal synthesizers, e.g. the famous Moog Taurus. Rutherford has also been onstage with various Washburn Idol models. Through the late '70s live tours, Rutherford often used a double neck that combined a 4-string bass with a 12-string guitar. That look became a trademark of those shows. A custom Shergold double neck was made that had modules for 4, 6 and 12 strings guitars. Rutherford would use different tunings on each song, so in Genesis early years there was a lot of tuning going on in between songs, which in turn allowed the development of Peter Gabriel's now famous stories and introductions. Today with Genesis Rutherford continues to use double-neck instruments, when the arrangements demand quick switches between bass and 12-string instruments. His current double-neck model is a Gibson 12-string guitar with a Yamaha TRB-4P bass while he prefers Eric Clapton signature model Fender Stratocasters when playing guitar on later pieces.

During breaks in Genesis, he recorded two solo albums, Smallcreep's Day and Acting Very Strange, and later performed in the band Mike + The Mechanics, a group he founded on one such break in 1985.

Mike + The Mechanics' most popular songs are "All I Need Is a Miracle", "The Living Years", "Silent Running" and "Over My Shoulder". "The Living Years" was inspired by Rutherford's relationship with his father, who died during Genesis's Invisible Touch Tour, and had never approved of his son's involvement in the rock and roll industry.

Rutherford also collaborated with other artists, including associates Peter Gabriel and Phil Collins, on the Against All Odds soundtrack, offering the song "Making A Big Mistake".

With Mike + The Mechanics