Peavey Wolfgang US vs Korean Review 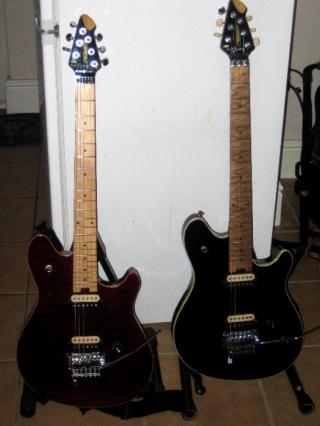 Price paid and where it was bought: Bought for £260 delievered - bargain schmargain!!!

Bought around 1.5 months ago. I wanted to try the cheaper Korean made Wolfgang before I splashed out on a Standard so that was the main reason for buying an EX, it just so happened that this one was reasonably priced.

I play punk, metal and rock and this guitar is suited to all. I run it through my Peavey 5150 and it sounds great. Its brighter than my Gibsons, probably due to the pickups and wood combination but it sounds beefier than the 490 pickups in my SGs.

The neck is a nice shape, not identical to the standard but still nice, its subtley fatter but not a great deal. Still very comfortable, not as quick though as it had a very light matt varnish coat - unlike the standard which is oiled. Neck access to the upper frets, just like the Standard is very good. The body doesn't have the archtop which when played sitting down isn't the most comfortable, it is also a lot heavier. The binding isn't really binding, its just the unfinished body wood colour made to look like binding but form a distance you could be fooled. Again the Peavey Floyd Rose Trem is great, this one differs as its cast but it is still a solid feeling trem. Like the Standard it only goes down, so no pull-ups a la Dimebag. It won't got out of tune either like the standard won't so top marks to Peavey on that front.

Compared to the Standard my EX sound a bit beefier but not as warm. Its got the same pickups so I suppose the denser body wood gives it a ballsier tone. There's no tone control which I actually like and would prefer this config in the Standard that I have. You just don't need the tone control at all as this guitar has loads of tone. You can experiment with the Neck pickup as its one of the nicest neck pickups I have ever used. Really great tone for blues and rock. Bothe the bridge and neck pickups are great for heavy rythmn work and with the right tweaking or pedal settings you could make this a great lead guitar too, I've seen people swap the bridge humbucker out for a Seymour Duncan Screamin' Demon but I am going to keep this as is because its got that Les Paul clout but with more bite when it comes to Rythmn work. If you want to hear what it sounds like, check the below link out, its being played on the main riff.

I'll have to knock a couple of marks off here, the strap buttons came loose and it appears that the holes are too big for them...a common fault by all acounts. Also, the jack plug washer keeps coming loose which is a bit of a pain. Nothing major but there are noticable which is a shame becuase the build quality is really really good. I don't knock Korean guitars like some people do, they can turn out some really nice pieces when they want to.

To sum this up, a lot of people buy the EX becuase they can't afford the Wolfgang Standard or the Special so how do they compare? With the Standard, the neck is different in terms of shape and finish but its still nice, quite similar to the neck on the Special. The sound is slightly different but its only becuase of the weight of the guitar, I haven't heard the Special but I'd imagine it would be similar. Looks wise, I like the quilted maple top (it also comes in blue as well). So in a nutshell, if you can't afford a Standard or Special then get this as its the next best thing. On the Wolfgang site they knock these Korean jobs and claim they aren't really Wolfgangs but the early ones like mine are really good and they aren't far off the Special. I'm told the later ones aren't as good. The quality is very good, the trem is the best Floyd copy I've used (along with the Schaller Floyd on my Charvel) and its similar to the one used on the Standard. The Grover tuners are great and keep this thing in tune really well. If you can save up and get a US made Special it will hold its price better than the Korean EX but if you honestly can't afford a Special then I'd get this.