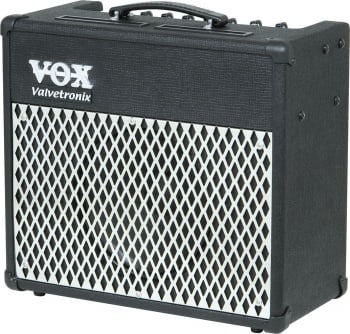 I am no amp expert but figured I write a review as I noticed a few GMC'ers are on the hunt for new amps. I own this amp and think it's a great value for the buck. I strickly use it for practice as I don't gig...yet However I will try to include what I know from my own usage and things I've noticed about this amp.

This rugged little amp is approx. 17"H x 18"W x 9"D and weighs in at about 26 lbs. The black textured finish and metal grill give it a modern look with a vintage feel. The Control panel is of a knob interface and is located on the top of the amp. I find this convienent for seated play as well as standing. About the only issue I have with the overall construction of this amp is the plastic handle and corner protectors. This is a cost cutting feature but I'm not sure how well these would hold up against a lot of abuse.(Although I've knocked mine around a few times and it's fine)

This is a modelling amp. It uses digital technology to produce the different tones of the amps being modeled and runs them through an analog power section. This consists of a 12AX7 (ECC83) tube and a virtual output transformer. This produces the charateristics of a real tube amp power circuit. (This is patended by Vox and is known as the Vox Valve Reactor. All the Valvetronix amps have this technology) The lone speaker is a Vox original 10" (8ohms) I'm not a tech geek so most of this reads like Greek to me But however the guts work, it makes for a very nice sounding amp. About the only thing I would do to make it a tiny bit better, and this would only be if I chose to gig with it, would be to upgrade the speaker. On some clean settings (not all) at a high volume it doesn't sound as crisp as I would hope, regardless of adjustment. But like I said, I think this may be solved by an upgrade to the speaker. It's more than fine for home use but I think I'd want something that sounds a bit cleaner at higher volumes than the factory one for gigging.

My overall impression is this amp sounds great! Everyone will have some tonal issues with their amp and it's all relative. I haven't upgraded mine and I am perfectly happy with the sound I get for what I'm doing. 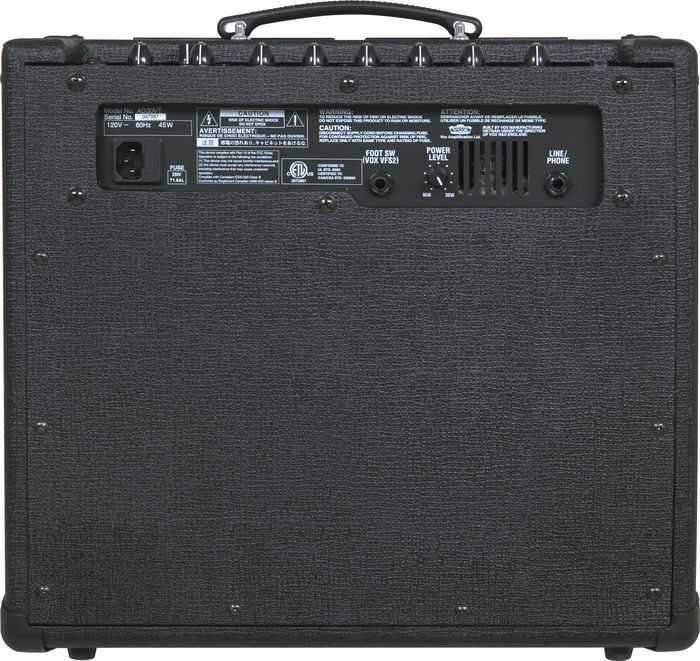 This amp has 11 amp presets and 11 effect presets (9 plus 2 combos). There is a line/headphone jack in the rear for home recording or practicing without annoying everyone around you as well as a seperate foot switch input (footswitch available but sold seperate). There is also a control knob to adjust the wattage (1-30) I love the fact that you have so many amps and effects to play with. I would highly recommend sitting with the owners manual and go through it as there is a bit of an adjustment period to this amp especially with the effects. But for the most part I found it pretty user friendly. I would highly recommend getting the foot switch. I think it retails for around $80 CDN but it is well worth it; just wish they'd include it with the amp. I really love the wattage adjustment feature as I can lose the volume but not the power. This is great when playing in your room or if you have an apartment.

My overall impression is that this amp is just shear fun to play around with.

I'll start with the operating modes of this amp which there are 3. PRESET is exactly that. This provides the typical settings of the amp you selected(EQ, gain, etc). MANUAL lets you bypass all the presets and allows you to use the amps control knobs to create the sound you want. The control knobs are gain, volume, treble, middle and bass. With the CHANNEL you can create 2 (I know not much) of your own presets and store them. As an example you can create your own clean and distortion or even a rhythm and lead. This is the reason I recommend the foot switch as you can switch between the two channels with ease. It also kind of gives you a third option as it can turn on and bypass the effects in manual settings. This could be useful in a gig situation although I've found it useful just for home.

Now as for the actual amp presets, as stated there are 11. There is a mixture of vintage and modern amps with 2 boutiques aswell. As to what exact amps are being modelled I don't have a friging clue. Vox is pretty vague with that, but the amps are as follows: Boutique CL, Black 2x12, Tweed 4x10, AC15, AC30, UK 70's, UK 80's, UK Modern, Nu-Metal, US Higain, Boutique OD. The first 6 have more of a clean sound while the last 5 are more distorted. Personally I prefer the more "vintage" presets such as the UK70's and AC30 (which is probably the one I use the most) They have a bit of a fatter sound than the other clean presets and I have no problem getting a Led Zeppelin or Rage Against the Machine type sound out of them. Now I mentioned before about the lack of crispness in some of the clean presets that would be the boutique CL and the AC15. I just find cranked up they aren't that great. I mostly play Classic Rock, some 90's alternative, and just plain old rock so nothing overly heavy. I think the Nu-Metal, US Higain, and even the UK Modern would be pretty good for all the metal fans out there as they are pretty heavily distorted however I do find them a bit to digital for me. Now a bit of tweeking is needed for all the amp settings to get that "perfect tone" but it is definatley a fun process.

I am very impressed with the sound I can get out of this amp. You can definately get what your looking for whether your a country fan, blues, rock or metal. It has something for everyone. For the price you are getting a lot of high quality amp tone in a nice neat little package.

This amp has 9 effects and 2 combos for a total of 11. They are: Auto-wah, compressor, phaser, chorus,flanger,tremolo,rotary,delay, reverb - accessible individually or with combinations. Most of these effects are very obviously digital but all in all they are pretty good. The only one I have real issue with is the Auto-wah. It Sucks!!! Very digital and no room for really adjustment. It just sounds fake to me. It's Ok for goofing around I guess but to me it just sounds horrible. I use my wah pedal instead. The only real issues I ever head with this amp is with the effects section. At first it is a very daughting and annoying process to try and access all the parameters for the effects. It requires some hand control and the owners manual as all the parameters are listed there. But as you get use to the amp it doesn't seem as daughting...although still mildly annoying The knob control uses the most common parameters for the effect and there are also a bypass and a tapping button to set delay time etc. But for the most part I find your restricted to the factory presets. I use the delay most often and find it works very well. It may not be the exact same as an external pedal but for home usage it suits me fine.

The effects section on this amp is pretty descent. For a practice amp it will pretty much do what I need it to and I can still use my wah and whammy pedals with relative ease. I'm still having a few issues with the adjustments on the effects for certain songs, trying to get it to sound just right, but I think that's me more so than the amp. However in a gig situaltion, unless your set only calls for one maybe two effects, I'd probably use an external effects source.

So in conclusion I would recommend this amp to just about anyone, beginner to pro, who is looking for a great practice amp that can do it all. It is not a very expensive amp but you get a lot of bang for your buck. If your looking for a gigging amp, like I said I don't gig, but the few things I pointed out where things I thought you may wish to consider. For a small venue or just a solo deal it would probably be just fine, but if your getting complicated and are at a larger venue I'd keep shopping and maybe look at the other Valvetronix amps as there are more features for gigging and recording as the models go up. I hope this review made sense and if you have any questions I'll try my best to answer them.