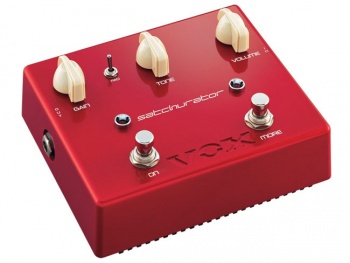 Vox Satchurator is a distortion stomp built by Vox in collaboration with guitar hero Joe Satriani.

I didn't buy it because it's a Satriani signature pedal, it just was the best sounding distortion pedal (for my taste) that they had that day at my local shop. I also tried a couple Boss overdrives and distortions, but this one sounded better to my ears.

It does a nice job for under 100€, so it's not cheap but it isn't expensive either. So what's good about this red shiny little square thing? For me the classic rock tone and the "more" extra stomp did the trick.

As you can see in the picture this baby sports not one but two knobs to kick, and what the extra knob does is it increases even more the amount of gain that you dialed. So it's like having three different settings in one stomp: clean (off), distortion (on) and even more distortion (more switch on). So the name of the extra knob doesn't deceive anyone, it reads "more" and gives more :lol:

Now some details: how does the "more" really act? In my experince it reaches the max gain setting of the pedal (not exactly as it always provides more gain than you dialed, but pretty close). This means if you are already using the gain at its max setting, you won't notice the "more" knob that much when you kick it. It shines when you have a moderate gain and then decide to kick in the "more" knob to act as a booster for a solo or extra hard riffing. It's also nice to play different songs that need different amounts of distortion without having to tweak the pedal knobs. Let's say you are playing some mild "Oasis" song, with the gain in the middle, then you jump to a Maiden cover and just kick the "more" knob and you are set.

As usual with distortion pedals this one has a tone knob. It's very sensitive, the slightest turn will change your tone, and it works best between 10-12 o'clock for my taste. The pedal also has a "boutique" alike "Pad" mini-switch. It's supposed to make the stomp blend better when working along with other effects such as a wah. Truth is I don't notice much difference in the tone whether I activate it or not!

This pedal delivers classic distortion, and even a mild overdrive on low gain settings. It can be pushed as far as classic heavy (Maiden) tone, but no further. It doesn't give that extra bite needed for metal. Great for rock/alternative though. I plan on getting a Boss MT-2 to cover more aggresive tones.

All in all a great stomp. Well built. Looks good too

Have you got one? Write your mini review here!